I was not looking forward to today but God is full of suprises had a great day at the baptist collage and leart that some times we judge to quickly
Posted by Mike martin at 12:27 PM No comments:

when is minstry best

I was reading an article on the internet that was telling everyone that fifty is the new thrity in minstry this got me thinking are we being just like the world and following trends and fads surly we are all lead by god and if we set our idaes on him then there can be no limit or trend as just look at Moses his best work for the lord was much later in his life and he was just one of a long line to excel at a later year surly we must not look at age but what God is doing in our lives
Posted by Mike martin at 12:26 PM No comments:

Well what a great couple of weeks, life always has a new turn of events to keep you interested, what a great night the valedictory was but it has its sad side it came to me how much I will miss the fellowship at Baptist Collage all the freinds I have made over the last three years. With everyone taking different paths I wonder if we will ever see each other again, there are a number of ways but I think that the collage forum needs to be a place for all the ex- students to meet maybe that could be something that we all could commit to it could be a way forward ?
Posted by Mike martin at 10:39 PM No comments:

With the last of the teaching weeks ended its time to look to the future so they tell you but this is one of the most testing times of our lives, gone is the routine of collage life and until it comes to the end you never realize just how much a comfort that is. Students who are leaving this year enter what is called the settlement process that word sounds so safe and comforting but beware it is only one of the most unstettling times of a students life. All around you people tell you that the Lord is in charge and to rest in the arms of Him who sustains us, thats all very well ,but they are telling you this from there nice safe cosy life so what do we do how do we cope with not knowing what is going to happen where we will settle. For all that you may dimiss the words that you are told thats all you can do is to trust and to rest in the arms of Christ
Posted by Mike martin at 6:47 AM 1 comment:

Email ThisBlogThis!Share to TwitterShare to FacebookShare to Pinterest
Labels: Settlement 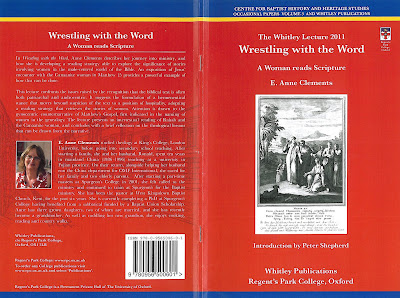 We are pleased to announce that this year's Whitley lecture is returning to Cardiff next week.

The lecture "Wrestling with the Word - a woman reads Scripture" will be given by Anne Clements at SWBC on Wednesday 23rd March, beginning at 3pm. All are welcome to attend, and the lecture will end by 4.30pm.

This lecture grapples with the issues raised when a committed Christian woman comes to the biblical text and realises that not only are there the verses from Timothy to negotiate but far deeper hermeneutical problems. How does a woman who does not wish to reject the authority of Scripture but who increasingly becomes aware of the androcentric, male centred, nature of the text and the patriarchal character of many of its stories come to terms with the Word ? Not only the text itself but patriarchal interpretation of these texts has caused anguish for many women called in different ways into God’s work. The lecture traces one woman’s journey from a call to ministry that led to an intellectual engagement with issues of interpretation and the formulation of her own hermeneutical stance. Out of this came her revisionist work on the women in Matthew’s Gospel in the conviction that the Biblical text contains a self-critique of patriarchy. The gender issue is now a mainstream topic both within the academy, the church (the BUBG Council 2010 debated the issues surrounding women in ministry) and at popular cultural levels. It is increasingly important to be able to articulate and develop a hermeneutic that both recognises the Bible’s patriarchy for what it is, whilst at the same time hearing God’s Word speaking to us within the complexities of lives lived in the 21st century.

The Rev Anne Clements is minister of West Kingsdown Baptist Church, Kent. She has been happily married for thirty years and is the mother of three grown daughters. She originally trained as a teacher and she and her husband spent ten years teaching in mainland China (1986-1996). She was called to the ministry in 2002, trained at Spurgeon’s College and was ordained in 2006. Anne is currently completing her PhD on the women in Matthew’s Gospel.
Posted by Louise Polhill at 4:11 PM No comments:

Children’s spirituality is a growing area of interest and research. However children come in two varieties, and gender differentiation increases at puberty; we therefore do girls (and boys) a disservice by ignoring, as most popular studies do, that they may ‘do faith’ differently. In this lecture, Anne will explore the ways early adolescent girls understand themselves, God and their faith within the contexts of home, church and school, setting their self-understanding within a framework of research into a spectrum of developmental theories.

Lecture 2 The Power of Un-naming: Girls and the Bible

Why are so few biblical girls named? Is motherhood a girl’s only God-given purpose and destiny? How does it feel that ‘there aren’t many parts for girls’ in biblical drama? Where do girls find their biblical role models?

These questions identify some of the issues many girls and women face when they read the Bible. This second lecture breaks new ground in taking a scholarly look at pre-adolescent girls in scripture, and through studying their place in God’s story argues for a ‘theology of girlhood’ that defines their distinctive role in salvation history.

After graduating in Theology from St Hugh’s College, Oxford, Anne worked for several years as a secondary school teacher and mother. After her call to Baptist ministry, she served in a local pastorate before joining the staff of Northern Baptist College (now Learning Community) where she is now Co-Principal. She has for many years been involved in the Baptist Union of Great Britain’s work on children in the church, abuse and domestic violence, and women in leadership, interests which demonstrate her passion to seek justice for people the church too often marginalises. Her book, The Faith of Girls, is due to be published by Ashgate in 2011.

Posted by Louise Polhill at 12:46 PM No comments:

This course will explore ways in which Mark‘s gospel can speak directly to the world we live in today. We will encounter again the call to radical Christian discipleship which so transformed the lives of those who first heard it, and we will investigate ways in which that same call can be heard in the twenty-first century. With an emphasis on the social, economic and political dimensions of discipleship, the words of Jesus can be heard to echo down the centuries, raising vital questions for those who would follow him today.

Simon Woodman is a lecturer in the South Wales Baptist College
Posted by Louise Polhill at 12:31 PM No comments:

Although anyone can comment on this blog, only 'contributors' can initiate posts. If you would like to become a contributor, please contact Simon Woodman at South Wales Baptist College.